Like many other topics when it comes to learning, I am a sucker for perspective.

Hence I really like this one and enjoyed writing this.

It always seems to blow some people’s minds when I bring it up in conversation or at least evoke looks of initial disbelief.

Let me put it this way.

I’ve found using time as an example is really useful, as people can easily relate to this generally consistent unit of measure across human experiences.

How much is a million?

Question: If I were to ask you how long do you think 1,000,000 seconds is what would you guess? Go ahead, take a guess and convert it to an equivalent number of hours, days, months or years.

How much is a billion?

Question: Now if I were to ask you how long do you think 1,000,000,000 seconds is what would you guess for this? Again, just have a go and convert it to hours, days, months or years.

Here are the answers. Check them against your guesses.

On the other hand, a billion seconds comes out to a whopping 11,574 days…

And that makes sense right? If you recall some of your math classes back in school – or if you were paying attention 🤠- you would of course know that a billion is made up of one thousand millions.

Yet when you convert it to years it comes out to 31.71 years!

That is almost 32 years! It took me awhile to first let that sink in.

That is how big the difference between a million and a billion is.

The difference between a time period under 2 weeks which passes in a blink of an eye versus almost 32 years which is 40.5% of the average human lifespan – approaching half a human lifespan!

I guess this is a general trait of humans not being able to visualize or imagine very large numbers.

This makes sense since we only deal with small finite numbers in our day to day lives.

“Our cognitive systems are very much tied to our perceptions,” said Daniel Ansari, a researcher at the Numerical Cognition Laboratory at Western University in Canada. “The main obstacle is that we’re dealing with numbers that are too large for us to have experienced perceptually.”

By contrast, we constantly experience small numbers. “Smaller numbers are more frequent in our daily vocabulary,” Ansari said. “When you lay the table you ask your child, how many knives do we need? It’s never going to be 10,000 unless you have a very big dinner party.”

And in line with our normal life experiences, our brains have become capable of representing small numbers, but helpless at accurately reflecting very large ones. “What you don’t have is an intuitive sense of what this number means,” said Brian Butterworth, a cognitive neuroscientist at University College London and author of The Mathematical Brain. “The reason for this is that our sense of number is based upon two innate systems which essentially deal with small numbers accurately or large numbers only approximately.”

So if you see huge numbers in the news like millions, billions and even trillions thrown around – it doesn’t really mean that much to a lot of people I daresay.

I checked out The Mathematical Brain by Brian Butterworth in a library before deciding whether to buy it and found it comprehensive but quite dense and rather academic.

Instead I came across Really Big Numbers by Richard Evan Schwartz which I later discovered won the “2015 MSRI Mathical Books for Kids from Tots to Teens Award.”

It was quite a fun read. Very light reading as it is very visual and illustrated in full color on every page. I was impressed with the sheer amount of artwork contained in the book!

As a sneak peek here are some of the interesting tidbits I picked up. 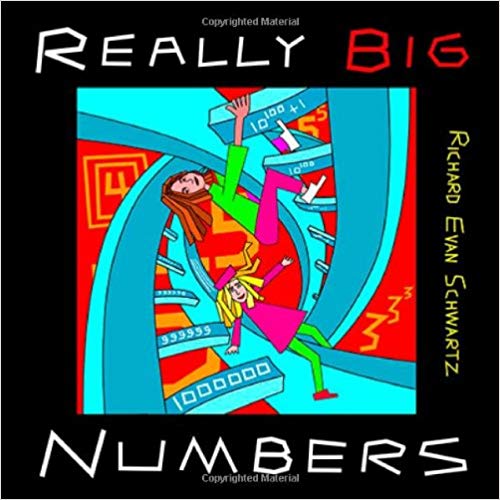 Perhaps after reading all this, you may have had that cheeky little question in your head saying, “yeah ok but what about one TRILLION (a thousand billions) seconds?”

I shall leave you with this…

…a trillion seconds would amount to no less than 31,709.8 years. A trillion seconds ago, there was no written history. The pyramids had not yet been built. It would be 10,000 years before the cave paintings in France were begun, and saber-toothed tigers were still prowling the planet.